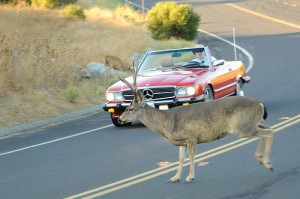 Deer & Car Collisions in the News
A man driving home in his pickup truck after visiting some friends swerved erratically when a deer darted in front of his vehicle. When he swerved in an attempt to avoid the deer, he went into the opposite lane and struck another vehicle head on. The other vehicle, a minivan, was occupied by a family of four. The resulting collision claimed the life of the driver and one other passenger from the oncoming vehicle. The surviving three passengers were seriously injured. Had he simply hit the deer head on he most likely would have only had to call a tow truck and been able to walk away.

Deer vs. Car Statistics
The National Highway Safety Administration (NHSA) recently conducted a study concerning the increasing dangers from deer-related vehicle accidents. Deer-related car accidents have consistently risen over the years due to increasing deer populations and destruction of their habitat.

Preventing Deer and Car Collisions
Deer can appear suddenly and without warning, but knowing how to react and where and when they are most likely to strike can greatly reduce your chances of being involved in an accident.

Don’t Swerve
The leading cause of accidents, injuries, and deaths from deer-related accidents is when vehicles swerve in an attempt to avoid hitting a deer. Swerving can result in vehicles moving into oncoming traffic, crashing into trees and other objects, or evening rolling over. While it may be against a driver’s first instinct, the safest thing to do is slow down as much as possible and let your vehicle strike the deer. Instincts tell us to avoid an obstruction in the road, but if you can train yourself to not swerve to avoid deer in the road you will keep yourself, your passengers, and other drivers much safer.

Know How Deer Travel
While deer can be active any time of the day, the majority of deer-related car accidents occur starting at dusk and during the evening. It is important to pay special attention during 6 and 9 P.M.

It is also important to always be aware that deer mostly move in packs, and that when you spot one deer, it is likely that there are more deer nearby.

Use High Beams When Possible
High beams should be used at night as much as possible to spot deer in the road ahead or deer that may be lurking along the side of the road. Make sure to use your high beams only when no other oncoming traffic is visible and make sure to turn them off if a vehicle approaches.